Adams Back For Another Crack at Bridge

Three-time winner and course record holder Liam Adams has today confirmed he’ll be returning for another victory attempt at the richest 10km road race in the country.

The Victorian was Australia’s top placed marathoner in the Rio Olympics last year, placing 31st in the ultimate test of the human spirit.

“The B&E Hobart Run The Bridge is a great event that I’m looking forward to.  It will be my first big hit out on the road since the Rio Olympics, so it will be good to see how I go against the best 10km runners Australia has at present,” Adams said.

“The race against Ben St Lawrence in 2014 stands out for me, because of how close it was.  I don’t think Ben will like me saying that though,’ Adams joked, referring to the race that had only a matter of centimetres in it.

Remarkably he ran exactly the same time last year, under different circumstances having to give the elite women a 4minute 12second headstart.  However he declared that a much faster time on the course could be on the cards with the unique concept set to continue.

“That was interesting, I didn’t think we’d catch the elite girls as they had a big lead but fortunately we came home fast and did catch them.

“I was actually surprised we ran that fast last year, but chasing the girls helped us to run faster.  I think mid 28’s are achievable on that course, so hopefully we can run a bit quicker this year,” he said.

As for a special secret that the apprentice electrician has that allows him to win so many close battles, he can’t name one.

“I honestly don’t have a clue, perhaps I’ve been lucky as I’ve always found something extra in the sprint finishes so  I don’t know if I’ll be that lucky this year,” he explained.

As for his current form, it’s quite unknown as the 30 year old did some serious damage to his ankle in the Olympic marathon and has only been make training a short period.

“I had 6-8 weeks off after Rio with an ankle injury and have had to do a full rehab.  I’ve only been back full training a couple of weeks now.  My training has come along really quickly, so I feel like I’m back to almost full fitness and I’ll be good to go come the B&E Hobart Run The Bridge,” he added.

This weekend he will find out how his form is going, with a race in Canberra in an attempt to qualify for his 8th IAAF World Cross Country Championships. 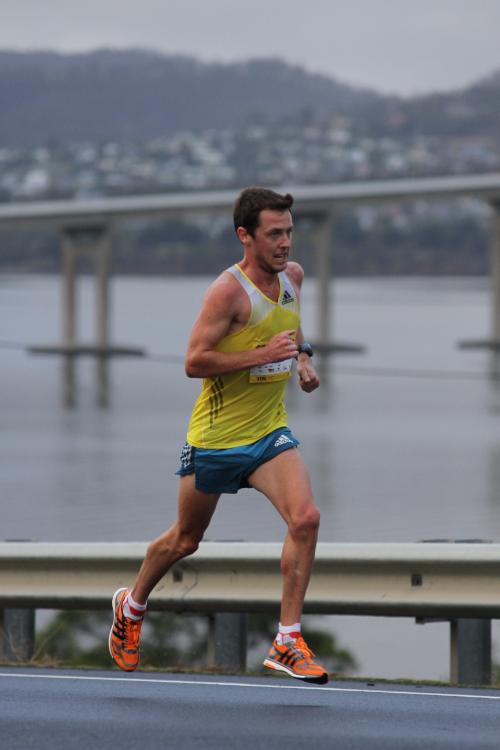