Birmingham to Debut on Bridge

Australian record holder Collis Birmingham is the latest addition to what is shaping up as an Epic battle in the B&E Hobart Run The Bridge this Sunday.

The Victorian is a two-time Olympian, World Championship finalist over 5000m, Australian record holder over 15km and the second fastest ever Australian over 10,000m, behind Ben St Lawrence who is also in the field.

“I haven’t raced since July, so I’m throwing myself in the deep end against three Australian Rio Olympians.  But I’ve won my last 5-6 races in Hobart, so that’s a good sign.  I’ve raced in Tassie a lot but haven’t yet done the B&E Hobart Run The Bridge,” Birmingham said.

Despite never racing it himself, many of his teammates have and have provided him with plenty of advice, whether it be useful or not.

“I have seen pictures of the bridge and ran past it, it looks a bit of a killer.  I’ve been told the first 5k is pretty hilly and then it is mainly downhill, but I haven’t been doing many hills in training so that will test me.  I trained with Dave McNeill this morning and I’ve done a lot of training with Benny over the years,” Birmingham added.

As for thoughts of fast times and an attempt on the course record of 29minutes 3seconds.

“I reckon Dave McNeill is going pretty well and with all of us running together we can maybe push for something like that.  I’m also training with the Swedish guys Mikke Ekvall and Gabriel Steffensen so perhaps we can work together,” he added.

Though he has raced all over the world and worn many Australian singlets, Birmingham is yet to line up in a race where the elite men give the elite women a headstart.  This is part of the Battle of the Sexes concept that sees the Elite Women get a 4:12 headstart from the rest of the field.  The first ‘person’ across the line will receive a bonus $2000.

“That’ll be good, it’ll make it interesting.  I remember seeing a picture of some athletes last year with I think it was Steve Scullion and Eloise Wellings having a sprint finish which looked pretty funny,” he added.

Unfortunately for Birmingham he missed selection for the Rio Olympics last year, after previously competing at London 2012 and Beijing 2008.  However with a home Commonwealth Games a little over a year off, he said he is coming into some great form at the start of 2017.

“Training is going well.  It’s been the best 3months of training I’ve had in probably two years.  So I think that hopefully ads up to a good race on the weekend and it’s a positive for me to be in this shape. 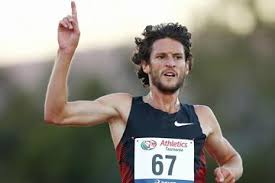