Hobart's Dejen Gebreselassie placed second in this years 10km race and we love his story so much we've decided to award him a second scholarship.

Hobart’s Dejen Gebreselassie is rapidly becoming a world class distance runner, however his path to that success is anything but usual.

As a long-time supporter of the Bank of us Run The Bridge, this year Dejen placed second in the 10km event and after watching his journey in recent years we’ve decided to award him a scholarship.  This is in addition to the announcement we made recently about Meriem Daoui.

Dejen was born in Ethiopia in 1993, then spent many of his developing years growing up in Umrakuba refugee camp in Sudan, with the rest of his family.  Each day was a struggle, but little did he know it was hardening him to become a world class distance athlete later in life.

In 2004 at the age of 10, his family was notified by the Australian Government that a place had been made available to them in Tasmania and he’s called Australia home ever since.

Although a good runner at school, his first sporting love was football.  He dreamed of playing for Barcelona or Manchester United.

A longer version of his back story is well worth the read and can be found here.

Fast forward to 2018, Dejen produced one of the races of his life to finish second in the Oceania 10km Championships as part of the Bank of us Run The Bridge in his hometown.

“Run the bridge is one of the best 10k races in Australia and also very challenging tough course with a bit of strong short hills to climb and some slightly down hills to fly on.

“I have always wanted to run a quick time in the 10km and since last year 2017 I was in my absolutely life best shape so that shape took me through 2018 season just as strong and smooth looking for a quick race in around February to prepare myself for the world half marathon in March the 24th in Valencia Spain,” he added.

“So three weeks out to my first and biggest race in the world I decided to enter the Bank of us Run the Bridge 10km.   It was amazing to race that 10km since it has been a long time that I had given my best or prepared the best way for it, but this year as I am in great shape and I prepared myself not only for a fast time I was happy to get second to a great athlete himself Liam Adams.

“There was only 5sec separation between us he really gave me a strong battle along with Brad Milosivic.

“I just want to say how lovely the run the bridge course is it's honestly awesome.  Like I mentioned there are a few small hills for a challenge but then there is a great view once you get up on the Bridge, it’s like wow, I highly recommend anyone who is interested to participate in this race for 2019

even though there are nice battle on the hills the course is fast enough to run a quick time on it just depends how fit you are and prepare well for it.

“I am looking forward to come back in 2019 and not only run the fastest time but to actually try to win the race.

If you are an Elite Athlete please contact Richard Welsh the Race Director you can't get any better race manager than Richard Welsh in Australia, He is absolutely awesome bloke very inspirational and supportive he knows how to do his thing 100% (editor’s note, we didn’t pay Dejen for this quote).

Moving on to the 2018 IAAF World Half Marathon Championships in Valencia, Spain and Dejen is part of a high quality Australian team.  Sadly some sickness creeped into his system on the travels over, but he still produced one of the performances of his life.

“Even though I was very concerned and a bit nervous before the race on sat because of my flu sickness, I still thought I will run a nice time for Australia and wanted to do my country and people of Australia proud.

“On the race day I was focused and confident enough that I went out in front with the best guys in the world and I was happy to deliver 63:47 half for 2018 season a fresh start.

As part of his scholarship, Dejen will receive a trip to the Gold Coast Marathon on July.

“My next race is the Gold Coast half marathon in 3 weeks time and I am hoping to run very well there.

“I am currently in Based in Hobart as my family and friends are all here.  I like being in Tassie, just the natural beauty of Hobart makes me want to relax and work hard here for a bit.   What I like about Tassie in terms or running is there are many beautiful training locations trails hills roads track to train on so you will never get bored by training in one place only.

“The hills are great here and the fresh air in the morning throughout the day is just amazing this is why I choice to train here.

“Thank you for taking your time to read my blog I appreciate everyone’s support always peace one love.

Dejen is very active on social media.  Follow him; 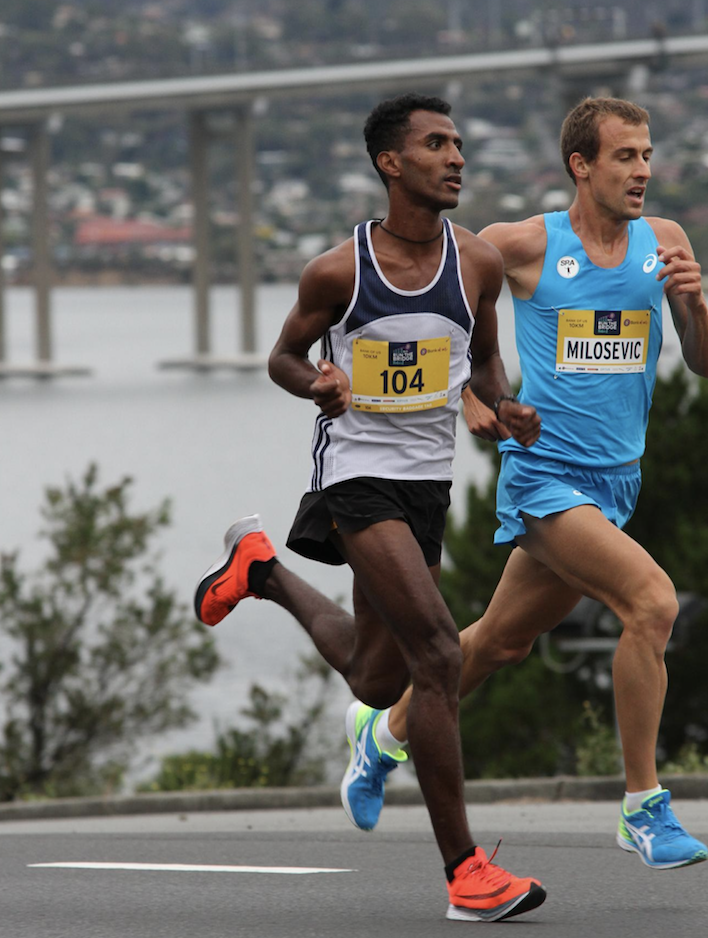