Commonwealth Games marathon medallist Jess Trengove is returning to the B&E Hobart Run The Bridge where she is no stranger to victory.

The South Australian won in 2014, her time of 33:19 being the second fastest for the course.  She also placed third in last years race and claimed she’s looking forward to her third outing at Australia’s richest 10km road race.

“We’re always really made to feel welcome in Tassie.  I love the B&E Hobart Run The Bridge with the rolling hills, point to point finish and the coastal aspect and the bridge its cool.  Finishing in the buzz of the crowd at Salamanca is awesome too,” Trengove said.

With a reputation of being a big time performer, Trengove finished 22nd in the Rio Olympic marathon, within eyesight of Tasmanian Milly Clark who placed 18th.  Last year Clark got the better of Trengove on the Tasman Bridge and the duo will face off once again next Sunday, against a posse of International athletes.

“I had a good 5-6 weeks off after Rio.  My foot needed it, so I knew I’d need a good bit of recovery and that was a nice time doing a few things I hadn’t had the opportunity to do given the hectic lead up to Rio.

“My main goal for this year will be to qualify for the Commonwealth Games.  We’ll be looking to target races that will help me achieve that best.  I’m mentally and physically refreshed now and hopefully will stay injury free,” the 29-year-old said.

The physiotherapist said that the timing of the race was perfect as a lead up to what she hopes will be a qualifying race over the marathon soon for the Gold Coast games next year. Trengove also admitted the lure of the ‘battle of the sexes’ concept was one too unique to pass up.

“It’s an event that falls in really nice in timing with me focussing on a marathon in April.  There aren’t many chances to run races this time of year, so this is the perfect chance.

“I was up at Falls Creek in January and on one of the long runs and we got chatting about races and then it felt like our Sunday long run got competitive between the men and the women, which was a nice bit of banter, I think it’s been really well received.

Given the field this year, there’s talk of fast times once again and Trengove believes that despite the point to point nature and undulations, there is a chance for athletes to produce fast times.

“It’s interesting because I do feel like for every uphill there’s certainly downhill.  I think it’s quite a quick course, because sometimes a rolling course can be faster cause it’s got some undulations.  The hills in Hobart look dramatic, I know when you drive the course it looks tough,” Trengove said.

The women’s elite field has now been finalised and includes; 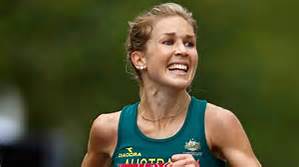