Workplace Rivalry Heats Up At University of Tasmania

It's Land V's Sea in a UTAS workplace rivalry for the ages.

A record 261 unique teams have registered for this years B&E Hobart Run The Bridge, varying from schools, businesses, community groups, friends and families.

Among them is a workplace rivalry for the ages, between two institutes of the University of Tasmania; Institute for Marine and Antarctic Studies (IMAS) and Tasmanian Institute of Agriculture (TIA).

Like many large workplaces, rivalry is big and tearoom banter happens daily as team members lace up for their lunch time runs.

“We are competing again for the “Golden Sandshoe Trophy” (aka Sweaty Sandshoe Trophy) which IMAS won last year and would like to retain which sits proudly at our IMAS Taroona reception area.

While none of the team members will be contenders for the prizemoney, that hasn’t stopped the trash talk about who will win on overall team placings, with IMAS saying they have prepared well for #HRTB17 and are ready to tackle the Tasman Bridge.

“Better than last year, everyone has been training hard to once again thrash the Purple TIA team, and have been dosing up on their Omega 3,6,9’s. And once again we will out style our TIA competitors with our stylish “houte contour designer running tops” and supreme athleticism,” Ms Richardson said.

Dr Anna Carew, Wine Scientist at the Tasmanian Institute of Agriculture and UTAS School of Land and Food said, “We sometimes compete for funding with IMAS but B&E Hobart Run The Bridge is our only sporting competition.

“The 2017 TIA team is hoping to win the B&E Hobart Run The Bridge against IMAS on the basis of our rampant enthusiasm, diversity of sporting performance and ‘most purple team shirt’. We were graceful in defeat in 2016, having lost on speed, athleticism, number of participants, most stylish shirt, and best tearoom,” she continued.

While the course hugs the Derwent River, Dr Carew was quick to point out her team will still feel at home as they go past some of the iconic sites of Hobart.

“If we fail to beat IMAS on speed this year, it will be because our TIA agricultural scientists can’t resist slowing down past Government House to check out the Governor’s fine herd of cattle and assess ripening on her grape vines,” she declared.

All jokes aside, both team members declared that events like fun runs are terrific way for work colleagues to socialize in a healthy environment.

“We congratulate everyone who gets involved, regardless of speed, because being there and having a go are what count. Being sweaty, puffed, knackered and high on endorphins together breaks down all kinds of workplace formalities and barriers,” Dr Carew explained.

Despite the rivalry, team IMAS echoed those sentiments.

“UTAS encourage and support its staff to get off the office chair to improve their health and wellbeing through wellbeing opportunities,” Ms Richardson added.

So far the largest team entered is Hobart social running group Sole Mates with 64 members, followed by Team DPIPWE for White Ribbon with 30, Veolia with 28, Hobart Jaguar with 26 and local Accounting firm Collins SBA with 22.

To enter the event and join a team, register online at www.hobartrunthebridge.com.au.

The B&E Hobart Run The Bridge is on Sunday February 19 and includes the following events; 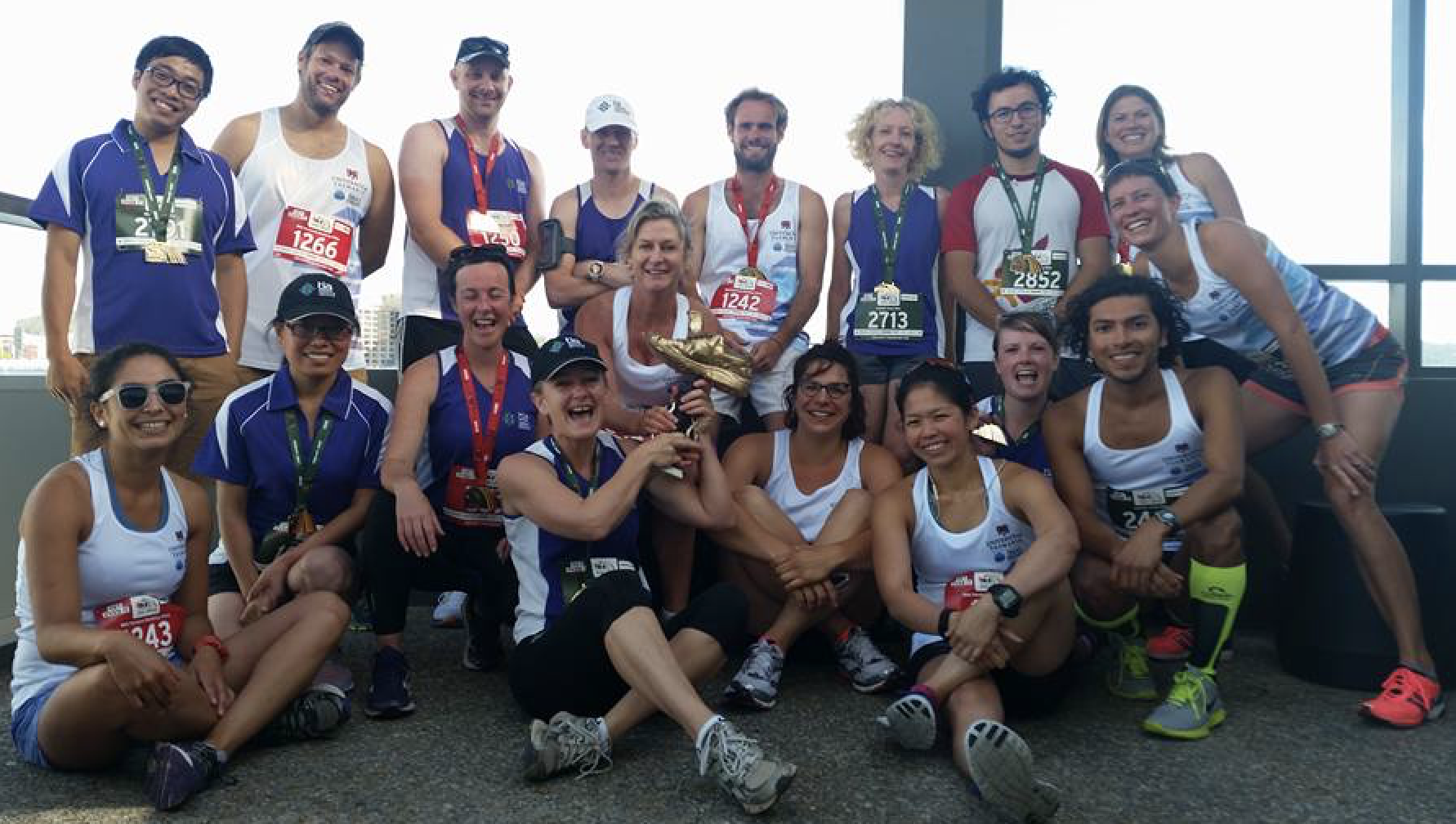